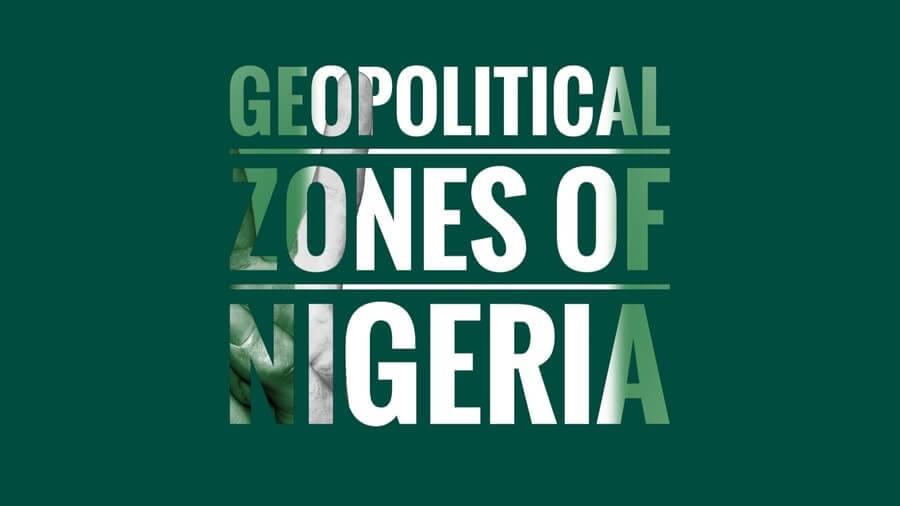 This article contains information on the six geopolitical zones in Nigeria, the states that constitute them, and the economic activities in the regions.

The geopolitical zones in Nigeria were created by General Sani Abacha during his regime as Head of States.

It is a major division between different sectors of the state. In recent times, these zones have played a key role in Nigeria’s politics, economy, and the educational sector.

Each geopolitical zone is made up of people with a similar ethnic background, cultural heritage, or history. Hence, location is a minor factor in the grouping. The division into Nigeria into several geo-political zones have both advantages and drawbacks.

The division of the country into smaller groups have aided the government in sharing resources to the various parts. That has been a major advantage, as it is easier to manage this way.

The Six Geopolitical Zones in Nigeria

The 36 states of Nigeria is divided into six geopolitical zones, which are; North Central, North East, North West, South East, South-South, and South West. Each zone contributes its own bits to the country.

There are so many ethnic groups in Nigeria. An average Nigerian state has more than 10 ethnic groups. Hence, splitting it into zones ensures that hundreds of smaller ethnic groups will be catered for.

Below is a table that shows the geopolitical zones in Nigeria and the states that make up the zones.

This is a map of Nigeria showing the six geopolitical zones in the country. The map shows the NE, NC, NW, SS, SE, and SW zones.

List of Geopolitical Zones in Nigeria and their States

The North Central is also known as the Middle Belt of the country. Amongst all the geopolitical zones in Nigeria, this zone has the most diverse wide cultures living together.

In other zones in the country, the cultures are quite similar. However, in this zone, that is not the case. There are people from different tribal groups. As a result, they are so many languages that are spoken in the region.

The North Central is made up of 6 states, namely; Plateau State, Benue State, Niger State, Kogi State, Nasarawa State, and Kwara State. The capital of the country, Abuja, is also in this geopolitical zone. However, the FCT is not counted as a state.

Some of the major cities and towns in the North Central are Jos, Illorin, Minna, Lafia, and Lokoja. The common ethnic groups in this zone are the Mada-Eggon, Igala, Tiv, Gwandara, Nupe, Igbira, Mangu, Berom, Gbagyi, and Idoma people.

The North East is one of the geopolitical zones in Nigeria. This zone along with the North Central and North West zones are major contributors to the agricultural produces that are consumed in the country.

This geopolitical zone is made up of Yobe state, Bauchi state, Taraba state, Adamawa state, Gombe state, and Borno state. The majority of the states in this zone are faced with insurgency. Hence, there is high insecurity in this zone.

Some of the popular cities and towns in this zone are Yola, Bauchi, Potiskum, Damaturu, Maiduguri, Jalingo, and Gombe. While the major tribes here are Fulani, Tiv, Babur, Tangalawaja, Balewa, Kanuri, Mumuye, and Fulfulde.

The northwest geopolitical zone in Nigeria has the largest landmass. It covers over 200,000 kilometres square of land and about 25% of Nigeria’s total land. Interestingly, it also happens to be the most populated zone in the country.

The popular cities and towns in this geopolitical zone are Zaria, Kano, Sokoto, Kaduna, Gusau, Dutse, and Birnin Kebbi. The common language spoken in the North West are Hausa and Fulani. However, other inhabitants speak Maguzawa, Baju, Kanuri, Jabba, Zuru, and Gbagyi.

The southeast geopolitical zone is quite homogeneous in cultural heritage and language. This zone is one that breeds the most entrepreneurs in the country. People from this zone are mostly business-minded or traders.

The Igbo language is the predominant language in this region, and the majority of the inhabitants know how to communicate with the language. There are other minority languages in this zone.

The South-South is otherwise known as the Niger Delta. This is a leading oil-producing geopolitical zone in Nigeria. The zone is responsible for over 90% of the crude oil that is produced in the country.

Only one state in this region, Cross River, is not amongst the leading oil producers.

There are so many enthusiast groups with rich cultural heritage in this zone. They are the Bini, Ogoni, Urbobo, Itsekiri, Ijaw, Ikwerre, Isoko, Annang, Efik, Ejagham, Ibibio and Esan speaking people.

The landmass of this region is less than 10% of Nigeria’s total landmass. However, they are amongst the zones that bring the most revenue to the country.

The South West is another geopolitical zone in Nigeria. The zone is also known as the Yoruba highland. Interestingly, the zone happens to have the most academicians in the country. Its inhabitants are known to be well educated.

The major language spoken in the South West is mostly the Yoruba language. There are a few other dialects in the region, with some of them closely related to Yoruba.

Economic Activities of the Six (6) Geopolitical Zones in Nigeria

The major economic activities in the North Central geopolitical zone in Nigeria are fishing and farming.

Due to the viable land, agriculture is a common source of livelihood. Also, the River Benue and River Niger cuts through this zone, as a result, fishing is possible.

Inhabitants also engage in mat making, hunting, dying, weaving, trading, etc. In Jos, there is Columbite and Tin, while in Kogi there is Iron Ore and Gold. As a result, mining is also carried.

In Benue State, there is limestone, which is important in cement production. The North Central also has a dam, Kainji dam, which is a source of hydroelectric power to Nigeria.

The North East is one of the geopolitical zones in Nigeria that farming is the primary source of livelihood. The inhabitants of the zone also engage in livestock production; reading of goats, sheep, and cattle. There are also farmers in this region.

There are not so much mining activities in the region. However, they have a sizable amount of natural resources.

The inhabitants of the northwest geopolitical zone of Nigeria are the major producers of Rice, Maize, and Sorghum that is consumed in the country. There are also large tomato farms and as well as other vegetables.

Like the North East, there are those into the rearing of livestock and fishing. However, they also have mineral resources which are being mined. For example, there is the mining of limestone at Sokoto.

The Southeast geopolitical zone is known for the business mindset of its inhabitants. Trading of food items and other non-perishable items is common in this region. However, one of the major economic activities is farming. Inhabitants farm and trade agro produce such as; kola, cassava, yam, rubber, and oil.

Due to the presence of mineral resources, they are also into mining; limestone, coal, etc. Abia and Imo state is also known to possess crude oil.

Anambra and Abia are States filled with several trading activities. They are also known to produce items that are used by the entire country. For example, the phrase “Aba made” is so popular.

That notwithstanding, the primary economic contribution to Nigeria is the production of crude oil from these zones. There are also other mineral resources in the states that make up the zone.

The South-South geopolitical major economic actives are mostly commercial and economic activities. The farming practice in this zone is sometimes that of South-South. Nevertheless, the zone is also blessed with abundant natural resources.

As mentioned earlier, the geopolitical zones in Nigeria have both been a blessing and a curse. It has allowed easy management of the regions. However, it has promoted tribalism and political feuds between various zones.

However, the economic activities in the various zones in the country aid in uniting the country together. Since the zones were streamlined in 1993, there ha not been so much progress as a nation, despite the abundant mineral resources.